PUNCHLINE PERFORMING LIVE IN VR (First Show in The Metaverse)

P﻿unchline, who rose to fame in the mid 90's via the underground NYC circuit and the Lyricist Lounge show, is set to play his first live show in Virtual Reality. The event will take place at The Underground NYC, a recreated underground club in VR, hosted on the VRNightlife platform. The event will also feature legendary producer and DJ, K-Def who will be rockin' the wheels of steel for the night.  To attend you must have an oculus quest.  We look forward to seeing you there.

H﻿iphopinVR presents the Mixed Reality Jam & Concert series featuring German Hip-Hop legend, Lakmann One performing Live. The event will take place at the MK2 Lounge in Offenburg, Germany and also in Virtual Reality which means, if you have a VR Headset, you too can join the party.  Support acts for the evening include Drive-By, Maximum One & Valentin, with music by DJ PC (Luxembourg) and a special Virtual Reality DJ set by Fokis.  The event will also feature legendary graffiti writer Rast FX doing a live graffiti session, using Virtual Reality technology.  We will have a VR station available for anyone to try and experience Virtual Reality themselves.  We will have a FREE Virtual Reality and MetaVerse workshop, for all ages from 3:00 PM - 5:00 PM so be sure to register and check it out.

CLICK HERE TO PURCHASE A PHYSICAL OR VR CONCERT TICKET

*﻿*PLEASE NOTE, PHYSICAL TICKETS FOR THIS EVENT ARE LIMITED TO 150**

REGISTER NOW FOR OUR NEXT "LIVE FROM THE UNDERGROUND" VIRTUAL REALITY, HIP-HOP SHOWCASE!! 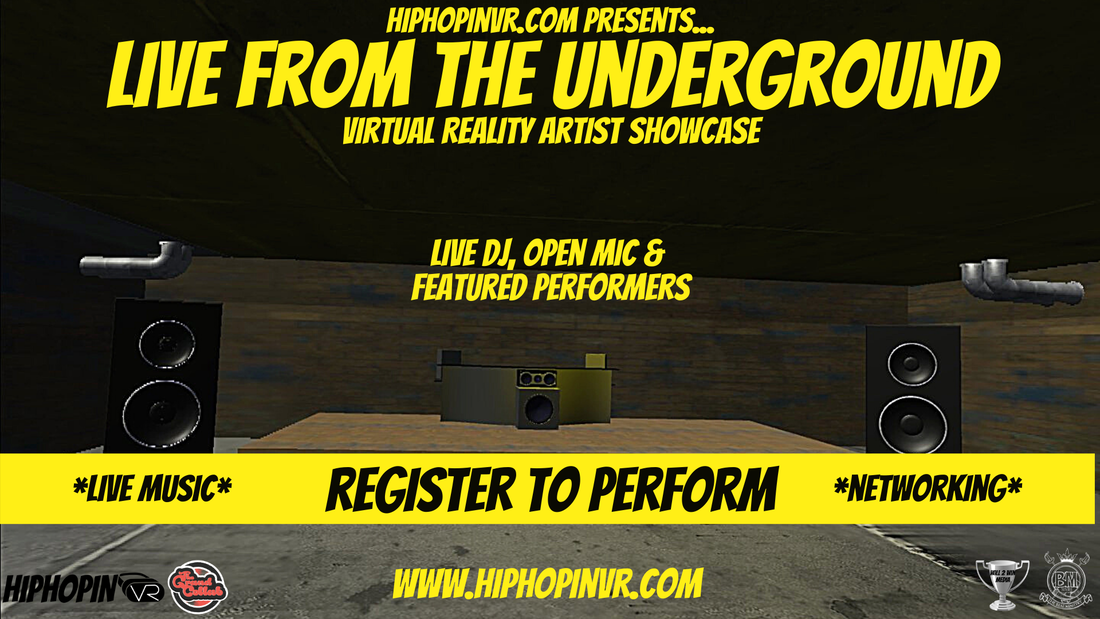 Are you an artist? Do you own a VR Headset? if so then we have something for you.  Introducing Live from the underground a new hip-hop showcase  in Virtual Reality presented by Hiphopinvr.  The event takes place in AltSpaceVR and feature various artists & DJs, from all across the globe.  There is an open mic segment where artists in VR can hop on the stage and spit a verse along with a featured artists segment of artists that registered in advance.  To be a featured artist, register below, if selected you will be given instructions on how to participate.  There is no fee to perform or to be a featured artist.   Good Look and welcome to the future.

Powered by www.Somniumspace.com, This episode of The Hiphopinvr show features hip-hop artist losLAUREN 718, reppin' the Bronx, NY. In this episode, losLAUREN drops some jewels about Synch Licensing, the importance of trademarking your brand/name, having a good team and much more. The Hiphopinvr show, hosted by Fokis, is a variety show combining News, Interviews, Live Music, Special guests & much more.  If you are a creator, builder, artist, Developer on any platform within the Metaverse and would like to be a featured guest,  please fill out the info below.  ​

"STAND ON YA OWN TWO" (MIXED REALITY VIDEO)

"Stand on Ya Own Two" is a mixed reality video shot both in Offenburg, Germany 🇩🇪 and The Metaverse via SomniumspaceVR. This song is from the album "Underground With Commercial Appeal" which is available now on all digital outlets, Vinyl, CD & Cassette.

Virtual reality is the future and the future is now.  Here is some footage of Fokis' first show in VRChat.  "It was a really fun experience, captured by The Fluff & me right from my own in-game camera. This place has dancers with Full Body Tracking, how cool is that. I highly encourage all artists and creatives to invest in a VR Headset, download VRChat and step into the future." - Fokis

SUBMIT YOU MUSIC TO BE PLAYED ON THE FUTURE IS NOW RADIO SHOW!!! 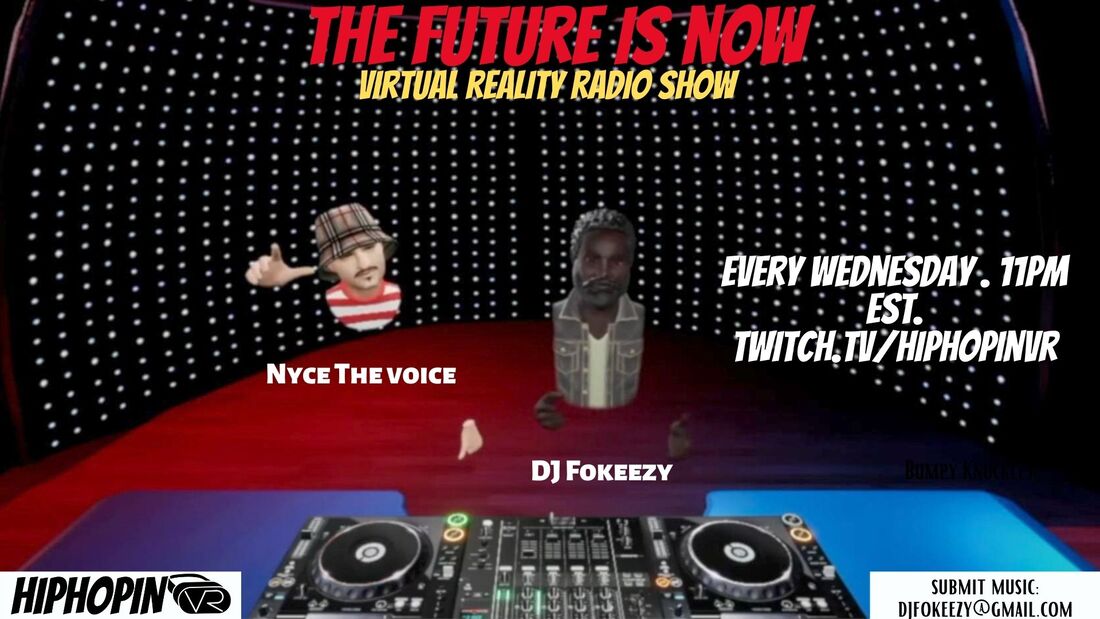 Join us Wednesday February 2 at 11pm (est) on Twitch.tv/Hiphopivr for the next episode of The Future is Now Radio w/ DJ Fokeezy & Nyce The Voice.  The Future is now is a weekly radio show that takes place in Virtual Reality that focuses on playing artists submitted music.  We also have discussions about immersive tech, Blockchain & crypto talk, live interviews and more.   If you're an artist and would like to submit a song for us to play send it over to DJFokeezy[at]Gmail.com
Live from the underground is a new artist showcase presented in Virtual Reality by Hiphopinvr & Will 2 Win Media. Hosted by EDO.G, the event premiered on January 13, 2022, in AltspaceVR and featured various artists. We even had some special hip-hop guests in the building (Def Jef & Bumpy Knuckles so you never know who will stop by.  If you would like to be a featured artist on the show, you can register below.

Fokis has been traveling through the Metaverse, playing live shows on various platforms while doing a review.  Check out his trip to Somnium Space and see what he thought about his experience there.

Check out Fokis performing "The Pressure" live in Virtual Reality at the Hiphopinvr.com 2nd annual Pre Christmas show in AltSpaceVR.  Be sure to follow us on our socials @hiphopinvr

Lower East Side, NYC emcee/producer Fokis has been quite the visionary and pioneer when it comes to the Virtual Reality space.  In less than one year since entering the space, he has on boarded over 350 people, performed packed out shows in VR, hosted free & ticketed events that included artists such as Ras Kass, Edo. G, Sadat X, Grandmaster Caz, DJ Red Alert, Nine & More, created partnerships with platforms like Somnium SpaceVR and most recently, introduced the development of his own platform VRNightlife.  Now Fokis has been focused on creating “The Soundtrack To The Metaverse” as he calls it.

Roaming The Metaverse, the upcoming album by Fokis is slated for release in early 2022 and is an album that represents the future of the music business. “I have been totally inspired by this new chapter in my life, I feel like I am in school all over again learning new things and it's so exciting.  The future of edutainment (entertainment/Education) is looking very bright and I want to help get the word out; that's what this project is all about.”  To set up the project, Fokis starts off with the single “No Space Like Somnium”, an Audio NFT written and produced by Fokis, that serves as the theme song to SomniumSpaceVR.  The song is available for free but there are 10 Video Trading Card NFTs available for sale that serve  as a token with utility. These 10 NFTs are uniquely named and include custom messages at the start of the song  “I wanted to create something special, something fresh and cool that gives the buyer of these tokens some real value.  I decided to create a win-win situation, something that gives the buyer some incentive to hold and promote the music and something that gives me an opportunity to continue to create”.

The first buyer of these NFTs will actually have a chance to earn revenue from the album sales, royalties and licensing as long as they hold on to the NFT at least up until the full album is released. The NFT is available now for sale on Opensea.io, only 5 of 10 have been made available, while the remaining 5 will be released over the course of next few weeks. 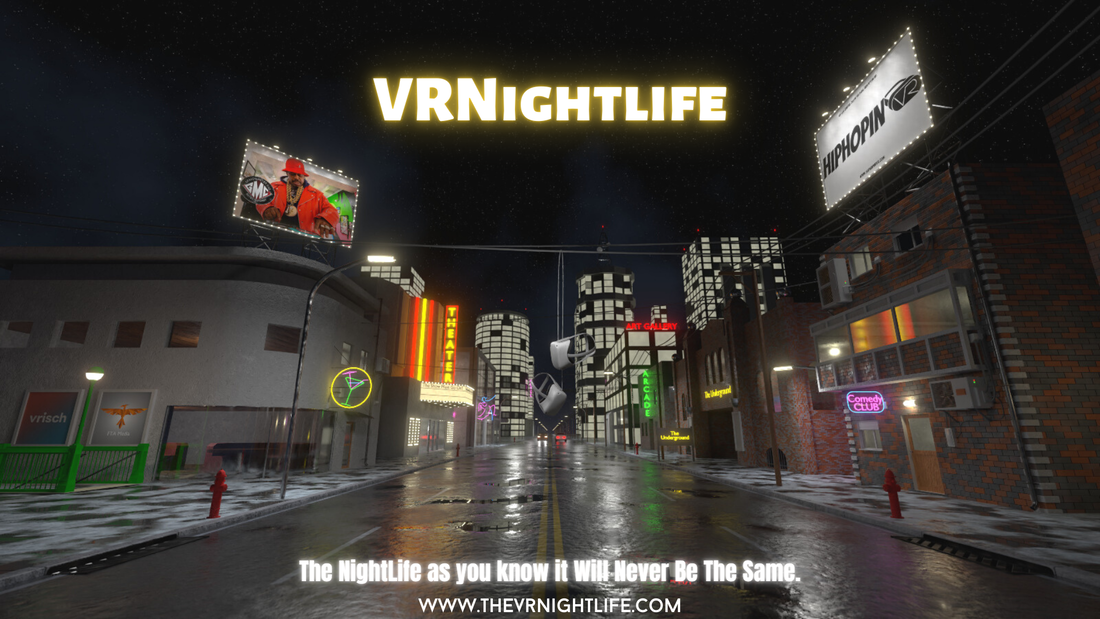 ​"Fokis On Hip-Hop" is a weekly Virtual Reality radio show hosted by Fokis, on the HHVR Radio Station in AltSpaceVR. The show consists of playing artist submitted music, special guests, live interviews and more. This episode features the legendary Grand Wizzard Theodore as he talks about how he got his start as a DJ, creating the Scratch, meeting Grand Master Caz, his thoughts on Virtual Reality and more.

​"Fokis On Hip-Hop" is a weekly Virtual Reality radio show hosted by Fokis, on the HHVR Radio Station in AltSpaceVR. The show consists of playing artist submitted music, special guests, live interviews and more. This episode features the legendary Boston emcee, Edo. G as he talks about his upcoming projects, touring Europe for over 20 years, effects of the pandemic, his most memorable show and his thoughts on Virtual Reality.

Check out part 1 of  Grandmaster Caz' interview at the Fokis on Hip-Hop Show on The HHVR Radio Station which will feature various radio and talk shows. "Fokis On Hip-Hop" is a weekly VR radio show hosted by Fokis, that consists of playing artist submitted music, special guests, live interviews and more. The first episode features the legendary Grandmaster Caz as he talks working with Macklemore, his upcoming album with Grandmaster Melle Mel, Virtual Reality, his pioneering Virtual Park Jam and more. 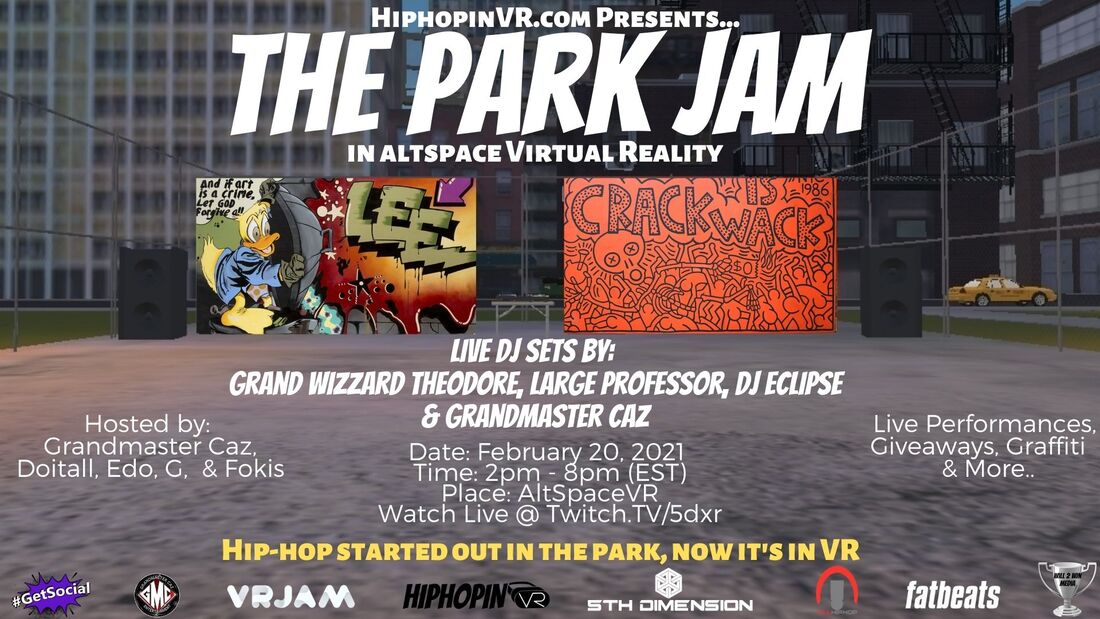 It's that time again.... Saturday, February 20th we will be at the Park Jam and we bought some legendary DJ's along.  The inventor of the scratch Grand Wizzard Theodore will be live on the wheels of steel along with Grandmaster Caz, DJ Eclipse, DJ Ice Cap (From Germany) Large Professor and more.  ​Event starts at 2pm (est) and will run till 8pm. You can join the jam with a VR headset (like an Oculust Quest 2) and rock out with us.  we will be hosting basketball shootout and bean back toss contests, winners will receive a $50 gift card courtesy of www.getondown.com or a Fatbeats prize pack. No Headset? No problem... you can create an account at www.altvr.com and join us in 2D mode. You can also watch the event live on our twitch.tv/hiphopinvr channel.